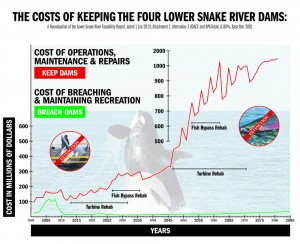 In its 2002 Lower Snake River Juvenile Salmon Migration Feasibility Report, the Walla Walla District of the U.S. Army Corps of Engineers vastly understated the costs of maintaining and operating four dams on the lower Snake River in eastern Washington State. The report concluded that modifications to these dams would result in the recovery of 13 species of threatened and endangered salmon and steelhead, and that the economic benefits of keeping the four Lower Snake River dams in place far exceeded those of a free flowing river.

The economic analysis that led to the Walla Walla District’s 2002 decision to keep the dams is seriously flawed. A professional reevaluation of the 2002 report—correcting earlier cost projections with now available actual costs and addressing omissions, errors, miscalculations and faulty assumptions—demonstrates the Walla Walla District understated the true cost of keeping the dams in place by a staggering $140 million on an average annual basis. A reevaluation of the claimed economic benefits of keeping the dams in place will be addressed in a separate report.

Civil Engineer Jim Waddell recently completed the reanalysis presented here. Waddell retired from the U. S. Army Corps of Engineers in 2013 after 35 years with the agency and was the Deputy District Engineer for Programs in the Walla Walla District when the Lower Snake River Feasibility Report was finalized. The Walla Walla District’s faulty analysis and unfounded conclusions in the Lower Snake River Feasibility Report have cost the American public hundreds of millions, and perhaps billions, of dollars in actual expenditures and lost benefits.