If you live in the Pacific Northwest, chances are good that your power bill will be going up soon 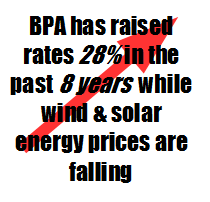 Many Public Utility Districts (PUDs) purchase power from the Bonneville Power Administration (BPA).  BPA is the government agency that markets power produced by the Columbia River Basin hydropower system and pays for almost all associated costs.

Compared to the other dams in the system, the Snake River Dams are economic losers, with a 15 cent economic return for every one dollar invested.  The power they do produce comes at a time when there is little demand and contributes to a surplus sold outside the Pacific Northwest. This has led to a dramatic increase in BPA’s federal debt over the last two decades.

The dam’s effect on salmon populations requires BPA to fund a Fish & Wildlife program.  Nearly 20 Billion dollars has been spent in the Columbia Basin to recover salmon, yet populations continue to decline. The 2020 Environmental Impact Statement commits BPA to continue funding these unsuccessful recovery efforts into the future.  Get involved to stop this waste of ratepayer money. With dam breaching, BPA can save fish & wildlife costs, incorporate cheaper forms of energy into the grid, and save salmon and orcas at the same time. It is time for our money to stop funding the Snake River Dams.

Here’s how you can help

Look at your utility bill to find out who your power provider is. Public Utilities have elected commissioners & city providers can be influenced by the mayor and city council.

You can speak up in several ways

The most effective is to attend a commissioner meeting or city council meeting. This gets comments on the public record, recorded, and heard by other community members (you can also call ahead of time and request to be added to the agenda which may provide you with a little more than the typical 3-minute comment).  If unable to attend in person,  submit comments by e-mail. You can also leave your utility/council members a message, or write a letter addressed to each commissioner/council member and mail it to their office.

What should I say?

Let the PUD know that you are a rate-payer in their area and you expect them to be good stewards of your rate dollars as well as endangered salmon and resident orcas.  It also helps to explain what motivates you personally and provide any research or talking points you feel comfortable using. Ask that they draft a resolution to support lower Snake River dam breaching.  Check out this script for more ideas.

Your PUD may have passed a resolution to protect the Snake River dams. These resolutions became popular after a campaign from the hydropower industry (hearts and minds campaign) sought to stop criticism of the Dams. If your PUD has a resolution like this, suggest they rescind it.

That doesn’t sound too difficult, is there anything else I can do?

Keeping the pressure on your commissioners is important if they are to address your comment. Commenting frequently and recruiting other neighbors and friends to comment will lead to success.

If you have questions

Contact us at info@damsense.org. We are happy to help you speak up on this important issue. If you were able to comment at a meeting, we’d love to hear how it went!