for calling and messaging elected and federal agency leaders 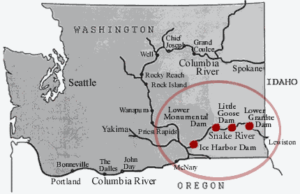 The US Army Corps of Engineers can order the Snake River dams to be breached based on the 2002 EIS (Environmental Impact Study) which they spent seven years and $33M developing.  The Army Corps of Engineers must begin dam breaching in December 2018 to begin recovery of endangered wild salmon and Southern Resident Orcas of the Pacific Northwest.

This is the last and best opportunity to:

Why were these dams built?

They were built to create an inland port for shipping grain by barge. Most farmers now ship by more flexible rail, at a lower rate.

Only one dam, Ice Harbor, is used for irrigation. Irrigation pipes can be extended to the river to continue irrigation, if needed.

Don’t we need the power they generate?

No, the extra power is not needed because the regional power grid currently produces a 16% annual surplus. If more power is needed, it can be replaced by wind power, a greener option.

Do we need the dams for flood control?

No, Congress did not authorize flood control as a purpose and the dams were not designed for it. Lower Granite dam actually creates a flood risk to Lewiston due to sediment build up.

What is the impact when the reservoirs are gone?

Before the dams were constructed, people gathered on the river’s banks to fish, camp, hunt and raft on rapids through picturesque canyons. Breaching would create 140 miles of fall Chinook salmon spawning habitat, and expose 20,000 acres of fertile land for agriculture. This land could be returned to the state of Washington to help fund school budgets.

What will it cost to breach the dams?

The cost is about $340 million, which would be paid by the BPA and/or the U.S. Army Corp of Engineers – not Washington State taxpayers.

What does it mean to “breach the dams”?

Who would do this work?

The U.S. Army Corps of Engineers has had a breaching plan in place for 16 years. It can be activated immediately and breaching can begin. Work must begin on the first dam in December to save the endangered wild salmon runs and help the orcas of the Pacific Northwest survive.