The Fish Passage Center (FPC) staff received two similar requests for summaries of water temperature data, management actions, and adult sockeye passage in 2015. One request was submitted by Oregon Department of Fish and Wildlife and Washington Department of Fish and Wildlife technical staff, and one was a citizen request.  Read the full report here.

Rocky Barker writes in the Idaho Statesman about how Snake River and Pacific Ocean changes could affect the politics of dam breaching.  Read the full article here.

On January 24th, 2015, orca advocates hand delivered a letter to Washington Senator Murray encouraging her to support the breaching of the four lower Snake River dams. Read the letter in full.

Editorial
The Daily Astorian
Oct. 26, 2015
An unfortunate fact of life for orcas — and everything else that relies on salmon — is that runs fluctuate.
Iconic Northwest species enters our waters

There was fascinating news last week about southern resident killer whales that have an extensive connection to the Columbia River. These scientific findings could have a major impact on salmon management and the hydroelectric system.

For many years there were occasional reports of orcas being seen by fishermen working offshore in the Columbia River plume. Starting in 2013, a satellite-tracking program showed how they also range up and down the outer coast. They appear to bide their time, waiting for returning Chinook salmon to begin congregating near the Columbia’s mouth.

Last week’s most attention-grabbing orca news involved a different new technology — use of a camera drone this fall to conduct a thorough survey of the J, K and L pods in Washington’s Puget Sound. Photos reveal the orcas’ everyday behavior, without the drone appearing to disturb them in any way. The 82 famous killer whales are doing very well, with new 2015 calves fattening and additional females showing signs of pregnancy. This is extraordinarily promising news for animals that are counted among the eight most endangered species in the U.S.

This comes in a year of healthy Chinook salmon runs, especially to the Columbia-Snake system. The annual count is now above 1.3 million returnees to Bonneville Dam. Unlike transient killer whales that range around the North Pacific hunting smaller marine mammals, the Puget Sound orcas are strictly fish-eaters, strongly preferring Chinook. This abundant year has clearly set off an enthusiastic round of baby-making.

An unfortunate fact of life for orcas — and everything else that relies on salmon — is that runs fluctuate. This year’s extreme Pacific Northwest drought and the warm El Niño waters now dominating the Pacific may mean a sharp decline in salmon two to four years from now.

• “Scales and fish tissue samples from fish kills by orcas has enabled researchers to trace those fish to Canada’s Fraser River in the summer, and the Upper Columbia and Snake River in the winter.”

• “A conservation biologist at the University of Washington … has noticed in his research on orcas that thyroid hormone levels that set metabolic rates are highest when the orcas arrive in late spring, suggesting the whales are arriving in Puget Sound after feeding on a rich food source: spring runs of Columbia Chinook salmon.”

This news is bringing a renewed interest in returning the Snake River to a natural-flow regime, something that would require bypassing four hydroelectric dams. This has been a nonstarter for regional politicians for years. But the amazing popularity of orcas and stringent federal legal protections conferred on them could be a game-changer.

While dam removal could eventually enhance salmon runs, the orca-Columbia connection could also bring additional fishing restrictions, notably in years when salmon are in short supply.

It is anybody’s guess how all this orca news will balance out for local fishermen. But it’s still fun knowing our local waters play such a key part in the lives of this iconic Northwest species. We look forward to many more sightings this winter and next spring.

We write to express concern over comments written by or attributed to you 1) at the
October 3rd Free the Snake Flotilla, 2) in recent letters-to-the editor, 3) in recent news articles,
and 4) on the Corps of Engineers’ current website.

To a participant during the Flotilla event you noted your appreciation for such events
as expressions of American democracy at work. We would hope you also tout an informed
citizenry as crucial to democracy and consider it your mandate as a government official—
particularly one of your rank and influence— to provide the public with accurate, data-verifiable
information.

In light of that mandate, we challenge, as detailed below, several of your recent comments
(in bold): Read the letter in full here…

Even with Endangered Species Act protection, two iconic Salish Sea species are struggling, and a newly formed alliance is calling attention to their plight. Read more…

By Chris Wood
CEO Trout Unlimited
(This article appeared in the Oct. 9 2015 edition of the Idaho Statesman)

Idaho’s wild salmon and steelhead are in trouble. Scientists say that at least 2 percent of the young fish migrating to the sea (smolts) must survive and return as adults for Idaho’s salmon and steelhead stocks to sustain themselves. That has happened only twice in the last 17 years. To actually rebuild the populations, scientists say that 4-6 percent must return. In other words, the status quo ensures decline for these fish that define Idaho and the Northwest.

Eight massive dams in the Columbia and Snake rivers that stand between Idaho’s spawning grounds and the Pacific are the biggest factors in the decline of Snake River salmon and steelhead. The slow-moving reservoirs behind the dams are thermal traps that kill fish. In the hot, dry summer of 2015, salmon died when they encountered lethally warm water in the reservoirs behind the four lower Snake River dams. Unlike a free-flowing river where water temperatures cool down at night, reservoirs trap heat and stay hot.

Certainly, dam operators and fish managers should be commended for using the limited tools at their disposal to minimize the loss of Snake River fish, but when we have met the bare minimum smolt-to-adult return ratios in only two of the past 17 years, these efforts fall short.

Without new ideas and a better approach, Idaho’s wild salmon and steelhead will go the way of the passenger pigeon.

Two decades of litigation have failed to force the government to take more decisive action to recover Idaho’s oceangoing fish. More than $12 billion has been spent on actions that fail to address the single-most important limiting factor for the fish. Simply put, not enough fish survive passage of the dams.

In 2008, under the leadership of then-Gov. Jim Risch, Idaho brought together sportsmen, counties, environmentalists, industry and others to protect Idaho’s 9 million acres of roadless areas. It wasn’t easy. It required compromise and negotiation. It took time. And it worked.

The government needs to follow Idaho’s lead and bring together farmers, tribes, states, conservation and energy interests, and local communities to save Idaho’s salmon and steelhead.

Only in such a collaborative forum can the stakeholders identify steps that will simultaneously recover the fish and keep communities whole. Sens. Risch and Mike Crapo have both expressed support for such a forum, but it remains elusive.

It isn’t just about the fish. Northwest electricity ratepayers and federal taxpayers provided millions of dollars for habitat restoration. Habitat in rivers such as the Yankee Fork, Lemhi and Pahsimeroi is much improved. Idaho possesses some of the finest salmon habitat on the planet, but if the fish can’t move from the ocean to the mountains and back, that habitat will remain a five-star hotel without guests.

We know how to recover Idaho’s wild salmon and steelhead. And we know how to protect the economic well-being and quality of life of affected local communities. It’s time for the government to step up and do its part.

The status quo of lurching from crisis to crisis offers no potential for recovery. As the deadly summer of 2015 has shown, the need is more urgent than ever.

Chris Wood is the president and CEO of Trout Unlimited, the nation’s oldest and largest coldwater fisheries conservation organization.

As we stood on our boards and paddled away from the cove at Malpais and turned south past the wave-break, I felt a rush of what Costa Ricans call pura vida—“pure life.” Read more…

by Scott Herning
Southern Resident Killer Whale Chinook Salmon Initiative
(This article appeared in the Oct. 14 2015 edition of The Journal of the San Juan Islands)

The protesters carried signs reading: ‘A River of Negligible Use.  Corps of Engineers’ or ‘Something is Happening Here’ Another sign read ‘More Salmon, More Orcas.’

What ‘was’ going on here? How could the Snake River, the largest tributary of the Columbia River, be thought of as ‘insignificant’ by our Government? Together these rivers were once the greatest salmon producers on earth.

How could removing dams save orcas? Easy. The dams have been killing millions of Chinook salmon for nearly 50 years.

Chinook, one of four species of ESA-listed salmon on the Snake, is the preferred prey for the Southern Resident orcas. Starvation is a top threat facing these highly social whales. NOAA’s 2008 Recovery Plan states; “the single greatest change in food availability for Resident orcas since the late 1800s has been the decline of salmon from the Columbia basin.”

The Center for Biological Diversity petitioned NOAA to include these orcas as Endangered; that happened in 2005. A decade later the feds are again being challenged, this time to revise the Southern Resident critical habitat to include coastal waters, which of course, includes the mouth of the mighty Columbia River.

Dam hydropower mistakenly has been thought of as clean energy. That is changing. According to a University of Cincinnati biogeochemist, in 2012 a large Ohio reservoir emitted as much methane, a potent greenhouse gas, as roughly 5800 dairy cows emit over an entire year. Add this to the fact that the lower Snake dams impede access to 5500 miles of cool, climate change resistant salmon spawning and rearing streams, and you have a strong new case that hydropower from dams is indeed ‘dirty energy.’

In the past year, close to 150,000 citizens (through petitions and email campaigns) have supported breaching the four lower Snake River dams to save salmon and orcas. The issue has reached national media attention with articles appearing in National Geographic, Huffington Post, and The New York Times. Leading environmental organizations such as Endangered Species Coalition, Patagonia, Oceana and Whale and Dolphin Conservation are also on board.

Use your superpower. Call our Commander-in-Chief (202-456-1111) and Senators Murray (206-553-5545) and Cantwell (206-220-6400) to tell them we support breaching the four lower Snake River dams to save the Southern Resident orcas. We owe it to the forty-five Southern Resident orcas who were violently captured and sold to marine parks during the construction of these dams. Only one of those Southern Residents remains alive in captivity today, Tokitae, aka Lolita. 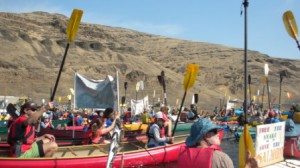